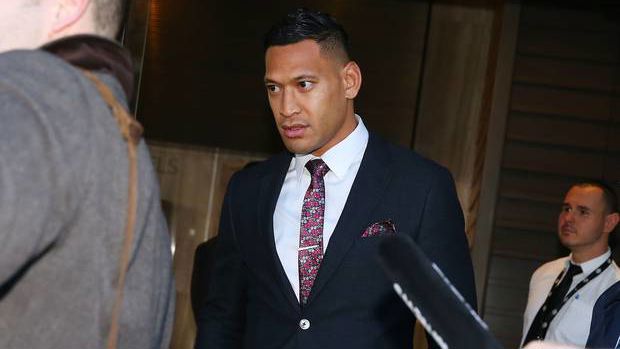 Israel Folau might have promised to refrain from publicly expressing his controversial beliefs, but it hasn't stopped one league club from trolling him online.

The 73-test Wallabies star has made a shock return to league after signing a one-year deal with Super League club Catalans Dragons.

But just minutes after Catalans announced Folau as their big signing, English club Wigan Warriors jumped on Twitter to take aim at the 30-year-old.

And the result? Fans apparently loved it.

🏳️‍🌈 @WiganWarriorsRL can confirm that their round six game against @DragonsOfficiel on Sunday 22nd March will now be Pride Day, as the Warriors look support the LGBTQ+ community.

Wigan's reply was met with viral praise with a number of people thanking the club for their stance.

"As a LGBTQ+ Rhinos fan I want to say thank you for taking this stance it is very much appreciated, I just hope Leeds Rhino and other clubs follow suit and stand up for equality and diversity in the game," one wrote.

Another added: "Big respect to you for doing this. I now know everything I need to know about what kind of club Catalans are. It is shameful that in 2020 they think it's OK to sign a player who uses his religion as an excuse to spread utter hatred. Appalling club!"

Others took the opportunity to take aim at Folau.

"Bloody brilliant! Don't want that bellend near the sport," one wrote while another joked "I "feel a sick note coming from a certain player".

The game against the Dragons will see the club's players wear rainbow socks and laces with LGBTQ+ groups, both locally and nationally, invited to be part of the day.

Folau has promised to keep his views to himself, with the club confirming the dual-code star has a gag order written into his contract.

Two days out from the start of the Super League season, Folau told the Perpignan-based club's website: "I'm a proud Christian, my beliefs are personal, my intention is not to hurt anyone and I will not be making further public comment about them. I look forward to my return to the great game of rugby league with the Catalans Dragons."

"We do not believe that those views should be publicly expressed, especially by a high-profile sports person," Guasch said. "We have a signed agreement with the RFL. Any transgression will trigger an immediate termination of Israel's contract and a substantial fine for the club.

"We want to give Israel a new opportunity to shine on the pitch. We do not support or agree with Israel's previously expressed and controversial views which are based upon his sincerely held religious belief."

Folau is also set to square off against Sonny Bill Williams, who has signed a two-year contract with the Toronto Wolfpack.