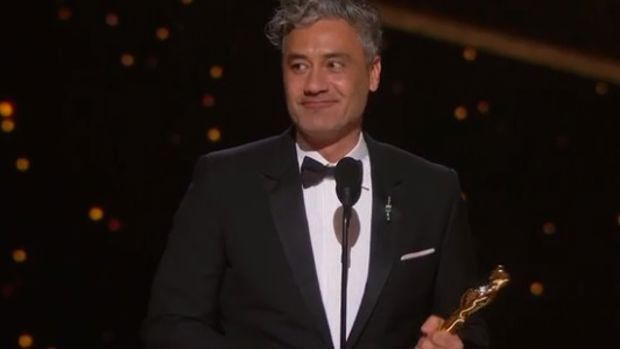 Taika Waititi has joked that he delivered the "worst" speech during the Academy Awards yesterday.

The 44-year-old filmmaker - who won the Best Adapted Screenplay gong for Jojo Rabbit - used his acceptance speech at the Dolby Theatre in Los Angeles to reveal his surprise at the weight of his statuette.

After taking to the stage, Taika said: "Thank you. Amazing. Thank you. This is really light, it's supposed to be heavy."

The acclaimed filmmaker then went on to thank his mother, largely for introducing him to Christine Leunens novel, which the movie is based on.

He continued: "I'd like to thank my mother, where are you? I lost you hours ago.

"Thank you for being my mother and many other reasons, but for giving me the book that I adapted, this film wouldn't have existed without you doing that.

"Christine, thank you for writing the book, the producers, thank you. There are many other people I wanted to thank but I can't remember them. That's it.

"This is really great and I dedicate it to all those indigenous kids in the world who want to do art and write stories. We are the original storytellers and we can make it too. Thank you."

Speaking backstage, Taika joked that his speech was the "worst" of the night because he didn't thank anyone for helping him on Jojo Rabbit.

He quipped: "You don't want to go up there and actually say lots of people's names. That seems like a waste of time.

"I've said to people before I came here, 'If I have to go up, I'm not going [to] thank you. Because why should I? I did all the typing. No one else did it. And all the words came from my head.'

"So, bottom line, I'm not going to thank my lawyer for that. I love him. He's done great stuff for me - he got me a bloody good deal on Thor: Love and Thunder, but he didn't type anything on Jojo Rabbit."