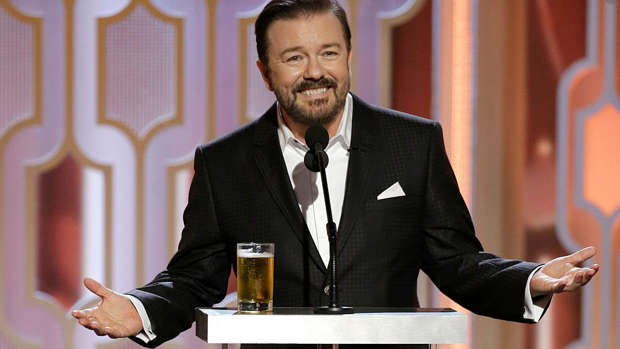 Ricky Gervais has joked he's got enough alcohol at home to survive a "nuclear winter".

The 58-year-old comedy star is currently at home with his partner Jane Fallon amid the coronavirus pandemic - but Ricky has insisted he won't be complaining about the lockdown and has admitted his life "hasn't changed much".

Asked about his situation in the UK, Ricky shared: "We're on lockdown but you're allowed to exercise every day.

"I've turned into that guy - when I see people having picnics and stuff like that, I want to call the police: 'There's some ne'er-do-wells having fun and games!'"

Ricky then claimed that unlike some other celebrities, he won't be feeling sorry for himself during the current crisis.

The 'After Life' star admitted he wasn't especially sociable prior to the lockdown and so he doesn't have any issues with spending more time at home - especially given his alcohol reserves.

He told the New York Times newspaper: "Apart from the gigs that were postponed, my life hasn't changed much.

"I didn't go out a lot, and there's always enough booze in the house for a nuclear winter. You won't hear me complain. Not when, every day, I see some millionaire celebrity going, 'I'm sad that I'm not on telly tonight.' Or, 'I had a swim in the pool that made me feel a little bit better.'"

Earlier this month, Ricky revealed he thinks his modest background showed him the "value of everything".

The actor comes from a working-class family and in spite of his own fame and success, he hasn't lost sight of what's important to him.

Ricky said: "It showed me the value of everything.

"People ask me why I dress like a tramp. And I say, 'My clothes are clean and comfortable. Who am I trying to impress?' I don't wear £50,000 watches. I don't collect cars because I can't drive."