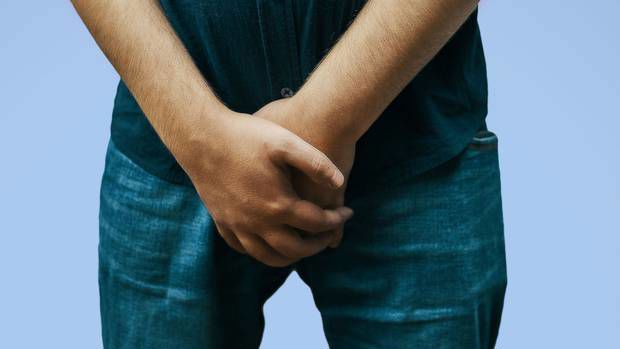 A UK man says he is living a "nightmare" after a workplace accident and subsequent surgeries left him with a permanent erection.

James Scott says he is a prisoner in his own Glasgow home: he is in constant pain and can't have his 9-year-old daughter round to visit - because he can't ease the painful condition.

Scott said he has been left in agony after an operation to fix his damaged manhood left it stuck upright.

Scott, a former glazier, suffered serious pelvic injuries after 1.5 tons of glass fell on him at work four years ago.

The 57-year-old suffered four injuries in his groin area, fractured a bone at the bottom of his spine, had lacerations on both legs and suffered a blocked urethra.

The father of one underwent an operation to repair his penis problem two years ago.

However, this left him with further complications and he discovered he was unable to get an erection, he told the Daily Record.

But an operation to fix that has now left him with a permanent erection.

Now, he says he is a prisoner in his own home, in constant pain and unable to put trousers on.

Scott, from Balornock, in Glasgow, said: "After the operation, I wasn't able to get an erection, so I had another op. They inserted metal rods into my penis.

"I was told it would be sore for about six to eight weeks after but I never expected anything like this.

"I've now got a permanent erection and I'm in agony.

"I can't bear anything to touch it. I can't even wear clothes. It's a nightmare."

He claims doctors have refused to visit his home to sort out the painful problem.

James claimed he was told by staff at the surgery that his GP was off on holiday and there wasn't another male doctor available to send out.

He added: "Surely male and female doctors assess patients of the opposite sex daily."

"In general terms, severe post-operative complications are most appropriately managed by the specialists in hospital and the safest option is for hospital assessment."

An NHS Greater Glasgow and Clyde spokesman said: "We would advise anyone who experiences adverse symptoms after an operation to call NHS24, who can recommend the most appropriate course of action."