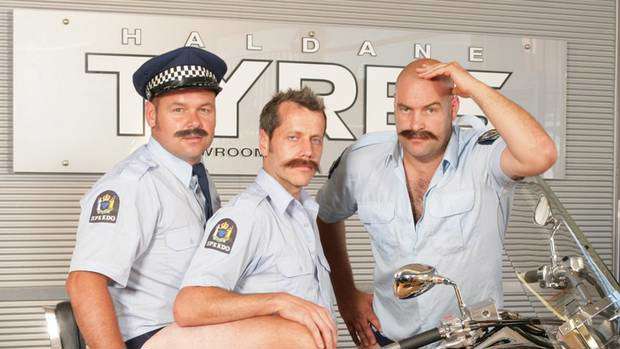 New Zealand comedian Leigh Hart worked as a research writer at Greenstone Pictures during the late 90s and helped develop the concept for Motorway Patrol. He wrote the proposal which secured the show funding from TVNZ and also worked as a cameraman and wrote some of the voiceover scripts during its early seasons.

Reflecting on his involvement, Hart revealed Motorway Patrol inspired him to make a spoof cop show to feature in his hilariously chaotic comedy series Moon TV, which ran for six seasons between 2002 and 2010.

"I have a lot of fond memories of Motorway Patrol," Hart says.

"We were making Moon TV at the same time and Motorway Patrol was so ingrained in me, I thought 'We've got to do a spoof cop show.'

"We put the speedos on as part of the comedy but really, from my perspective, the speedos had nothing to do with it.

"It was taking the piss out of that genre of TV, and hence that's where the phrase came from that we ended up using a hell of a lot on Moon TV: 'But then, drama.'

"I was a fan of Motorway Patrol and sort of involved in it, and I was close enough to it to see the humour and the irony of it all."

Hart remains grateful for the support of Greenstone founder John Harris, who not only employed him but fostered and encouraged his extracurricular television exploits.

"John could see I had no budget for my show and he would give me all the second-hand DV tapes that had only been used once.

"He would give me boxes of these tapes for nothing and I'd go shoot Speedo Cops on the top. So in many ways, Speedo Cops and Motorway Patrol got shot on the same tapes sometimes."

Hart took further inspiration from the way Motorway Patrol would make routine traffic incidents exciting to viewers. Following suit, he borrowed the use of a narrator and added lines for characters to over-explain simple scenarios in Speedo Cops.

"It was the fact that nothing happened in Motorway Patrol yet it was terribly exciting," he said.

"Hence the voiceover 'He's been pulled over, he doesn't have a licence. But then, drama – he can't find his licence.'

"You'd think you were watching the Twin Towers collapse. And I loved that and I stole that and turned it up another 20 or 30 per cent and added speedos and that was it."