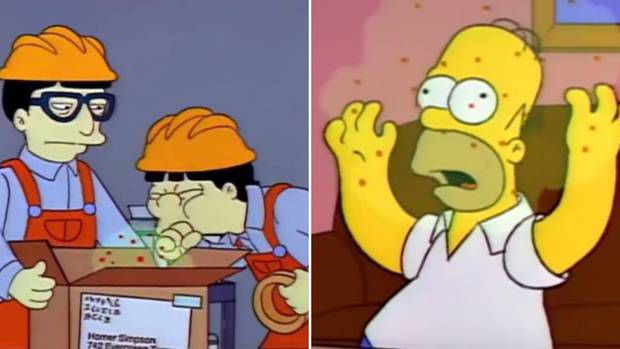 The Simpsons have done it again!

Fans claim the animation, which is well-known to foresee major events, predicted the deadly coronavirus outbreak 27 years ago.

In an episode from 1993, Marge in Chains, a virus called Osaka Flu spreads through Springfield after residents order juicers from Japan.

The episode features two workers packing juicers with one of them saying: "Please don't tell the supervisor I have the flu".

The other work said: "I have been working with a shattered pelvis for three weeks" before the sick one coughs into a box.

The same episode also features what fans believe is a link to Kobe Bryant's fatal helicopter crash, which killed the basketballer and his daughter.

As the town ends up in a state of panic because of the outbreak, a news reporter in a helicopter repeatedly says the phrase "going around and around" which theorists claim are a direct reference to what happened to Kobe Bryant's helicopter before it crashed.

People on Twitter were quick to share the similarities between the episode and the real-life virus, despite the fact that the coronavirus came from China and not Japan.

Some even photoshopped coronavirus onto The Simpsons local report.

The Simpsons are from the future. They have predicted everything that has happened to us. Like trump becoming pres, Kobe’s death and now the coronavirus. What’s next?! The world ending? pic.twitter.com/2CvELnWcrZ

The Simpson did it again #coronavirus pic.twitter.com/4bdvdV5kEp

The Simpsons scares me. This episode aired 27 years ago in 1993 🤯 #CoronaVirus pic.twitter.com/Zc0XUZn5PO

From The Simpson 1996 episodes. 🤦🏾‍♂️ I swear their producers are from the future 😱😕🙄 #coronavirus #CoronaOutbreak pic.twitter.com/bpgn89Nhp1

A new strand of the coronavirus, which originated in Wuhan, China, has killed at least 304 people, with at least 14,380 infected by the virus.

There are no confirmed cases of the coronavirus in New Zealand as of yet.

Other episodes where The Simpsons predict the future include Donald Trump being president of the United States, 911, US beating Sweden in Olympic curling and Lady Gaga's half-time Super Bowl show.