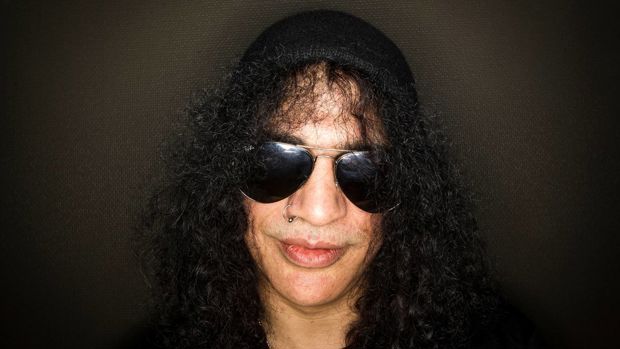 In 2012 Slash from Guns and Roses he was over here on a solo tour. I had a friend Rickey who was also a big fan of Slash and I invited Ricky into the studio and said you can sit in the corner there.

And Slash arrives with all of his people, his minders and security, and there's quite a hullabaloo as everyone's getting themselves organised.

I fancy myself as a bit of guitar guy and I had one of these small imitation Marshall amps in the studio – just a little practice amp sitting on the desk and so Slash comes in with his people and the first thing he does is point at the amp and says "Can I have that?".

Then suddenly his security team goes starts booting everyone out of the studio - including my mate Ricky - and things are then getting really tense and I tried to say "You can't just come in here and kick everyone out of the studio - you don't have that right!" I mean, I'm a huge fan of Slash and it was getting a bit confrontational and weird. Especially after me telling him he couldn't have my amp.

The Slash started to try to smooth things out and explained having an empty studio clear of hangers-on is just part of the rules and he starts being nice. Then when finally everyone's out of the studio - Slash starts again ... "Can I have that amp? I'll buy it off you." And I was getting slightly annoyed and said "I don't want any money for it - any money at all, you can't have it." and he goes ... "I'll give you good money for it." And again I said "Nah you can't have it."

And all of this is before the interview had even started. I was thinking this has gone quite interesting. We've kicked everyone out, I'm in there on my own and I'm having an argument with Slash – one of the greatest guitar players of all time and he's trying to get this amp off me. There's a bit of power struggle going on.

Then I notice - he's quite a bit shorter than me and it's all getting pretty weird and I'm feeling a bit uncomfortable.

But weirdly again- what follows is a warm interesting interview. And I forgot about the altercation over the amp totally. It was great and I'm back being a big fan.

Then straight after we get the picture taken and I thought this is great - but when I got the picture back he was making the small dick sign with his hand behind my head!

He obviously hadn't forgotten the altercation over the amp and also I didn't realise he'd made the gesture behind my head until I put the photo up on Facebook and there's me and Slash – with his gesture and then there were just screeds of comments - "he's making the small d*** sign" over and over again on the Facebook feed.

Now I think maybe I should have just given him the amp. But it had been given to me by the mother of my children. I couldn't just go home and say, "I've given it away".

Also I don't have that amp anymore - I think I gave it to Jordan Luck.