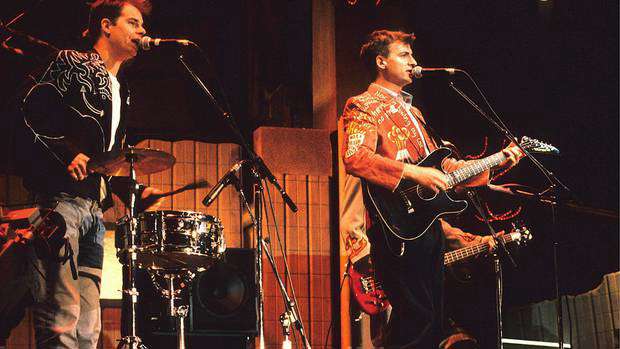 As part of Rocktober, Matt Heath spoke to TimeOut about his first-ever live gig.

My first rock gig was Crowded House at the town hall in Dunedin. I think the support act was some weird band called Schnell Fenster. I loved them. I think someone had a "keytar" but I could be wrong. I just looked them up on YouTube. Still good and weird. Not sure why they weren't huge.

I was at intermediate school. My big sister took me. I wanted to drink. She wouldn't let me. She drank. A lot. Boy did she drink. I drained two of her wines when she went to the bathroom. Got a bit of a buzz on. She didn't even notice they were gone when she got back.

I loved Split Enz at primary school (because my big sister did). When that Crowded House album came out, it blew my mind. Then they become huge. I wore the T-shirt I bought at the show until it got so stinky and rotten it fell off. I got into a fight at high school over it. Someone said "Crowded House are p******". I took a swing and missed. I saw Neil Finn playing with Fleetwood Mac the other day. The guy is still awesome.

I couldn't hear at all when I got home. My dad yelled at me for yelling at him about how good the show was. Then my mum told my sister off for making me deaf.

Any rock cliches?
Crowded House weren't that down and dirty. They were never the shirts-off, drugs-on-stage, call-for-lines-of-groupies kind of guys. But I was a kid. They were terrifyingly rock and roll to me. I got scared the town hall might fall down when everyone started stamping their feet for an encore.

How much did you rock out?
Not much. I was a bit overawed. It was too good to be true. Also, I was the only kid there. I thought I might get kicked out if I got spotted. We were seated in the upper balcony. At one point everyone stood up and started dancing. I stood up on my seat so I could still see. Eventually I got the courage to jump up and down to Mean To Me. My leg slipped through the back of the seat and I couldn't get out. My sister had to help me. It was humiliating.