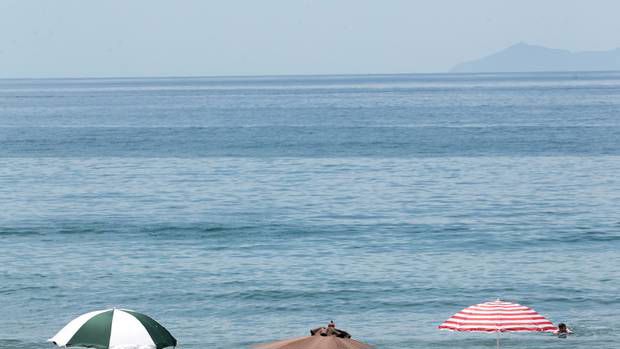 The best thing about the New Zealand summer is saying 'how hot?' to everyone you see. 'How hot?' brings us together as a nation. Kiwis have always talked about the weather. We get a lot of it here.

But in recent years we New Zealanders have been honing our weather chat down to two-word bursts. 'How hot?' when it's hot and 'how cold? when it's cold. It's hot at the moment so we are sharing a lot of 'how hots?'. (Well it was hot last Friday when I wrote this. Hopefully, it's really hot today otherwise this column is going to lose some potency).

It's important to remember that 'How hot?' isn't a question - it's a statement. When a friend or workmate walks up to you and says 'how hot?'. You're not expected to pull out your MetService app and say '28 here in Te Atatu, 95 per cent humidity'. The correct answer to 'how hot?' is either 'so hot'' or to nod and mime pulling your collar out from your chest.

'How hot?' really means 'I know what you are going through buddy'. 'We are both hot'. 'We are in this together'.

When you have 'how hot?' in your phrase arsenal you will never feel awkward. Even talking to other parents at a school BBQ. (One of the most awkward situations we can be put in). It's nice to have something to talk about when there are no traveller families in the country, cafe related indiscretions in the news or All Blacks games.

Stressed out as the heat makes us I'd argue the shared experience of it being hotter than usual brings races, creeds, ages and sexes together. We are hot as a people. That's a bridge.

At this time of year, National supporters can ask Labour supporters 'how hot?' and get a friendly 'so hot' back. In the last two weeks, I have asked 'How hot?' of both Prime Minister Jacinda Ardern and leader of the opposition Simon Bridges. Both agreed 'so hot'.

Yep, this heat brings us together.

Eric Watson could ask arch-enemy Sir Owen Glenn 'how hot?' and the millions and millions of disputed dollars would be forgotten for a second as he answered 'So hot'.

I reckon best selling Canadian intellectual Professor Jordan B Peterson (who is in the country) could wander up to the people who are grossly misrepresenting him on posters all over town and ask 'how hot?' and get a 'so hot' back.

If Eden Park said 'how hot' after 10.30 pm to Mark Donnelly of the Eden Park Neighbours'
Association. Even he would probably reply 'so hot'. Actually, this might be pushing it. He'd probably write to the council to complain.

That lady who attempted to publicly shame the Auckland cafe owner over the confused joke on his chalkboard. You may have seen her on Seven Sharp. The one who even after finding out it was all a misunderstanding, still stated 'I don't have any sympathy for him'.
That woman. I believe even she could find common ground over 'hot hot?'.

"How hot?'. It's so hot it's all we can think about. Hence this punishing article which has asked 'how hot?' 21 times so far and will hit a quarter century before it's done. Might even throw in a 'how cold?' too.

We will miss the 'how hot' chat when it cools down like it does every year in March. Of course, then we have the unifying 'how cold?' chat to look forward to in July, August, and October. After that, it's 'how hot?' a couple of times in November and December
before full steam 'how hot?' again January and February.