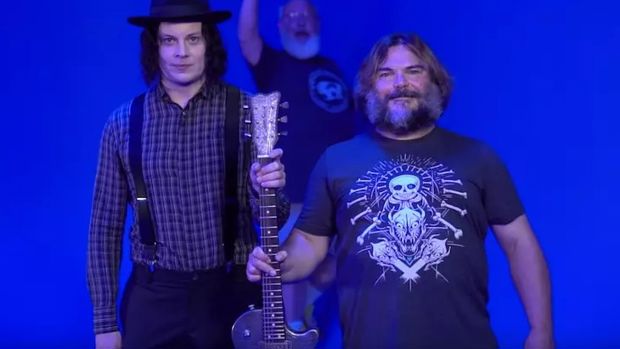 Back in August, Jack Black made our dreams come true when he shared a video confirming that Tenacious D recorded a song with Jack White. Now, we're learning that they collaborated on not one, but two, songs, and they'll be coming out on vinyl as part of Record Store Day's Black Friday offerings.

Marketed as the Blue Series, the 7" features two tracks — "Don't Blow It" and "Kage — both of which were produced by The Raconteurs frontman and will be released on his label, Third Man Records.

Though we're bummed neither of the tunes are titled "Jack Gray," we can't wait to hear the collaboration. On Tuesday (October 8), Tenacious D announced the single news via Instagram. Check out their post below.

The time has come! Tenacious D Blue Series 7” produced by the one and only @officialjackwhitelive - out Record Store Day / Black Friday! Link in bio.

The White-produced Tenacious D single isn't the only cool record coming out on RSD Black Friday. Pearl Jam will be releasing their 1992 MTV Unplugged set on vinyl for the first time. The National are releasing their new live album. Arcade Fire are re-releasing their iconic single "Neighborhood #1 (Tunnels)" with a cover of The Alvino Rey Orchestra’s “My Buddy” as the B-side. Kings of Leon are giving their 2004 EP Day Old Belgian Blues its vinyl debut, and so much more.